Special thanks to Graeme McVitty, Charles Sturt Museum and those who have assisted with this project.

Lt. Col. George Gawler, Governor of South Australia instructed Captain Charles Sturt in early November 1839 to order an expeditionary party to explore the land along the Murray River up stream and overland from the great North West Bend.

Governor Gawler had instructed Sturt to include his daughter Julia and Mrs Sturt with her maid servant Eliza on the expedition to demonstrate to new immigrants that travel and settlement with in the colony was safe.

Strong criticism was shown by the press of the day as to ladies being present on the expedition however the Governor may have questioned his own judgment in later days with the hardships they encountered.

The expedition made its way from Adelaide on 22nd November 1839 with some on horseback and others in the Governor’s carriage which would have made a grand and amazing spectacle as they departed en route to Currency Creek.

The main party reached Currency Creek on the 23rd November and departed on the 26th by boat and on horseback.

It has been reported the provisions taken were as follows:

On the 29th November 1839 Miss Julia Gawler wrote in the manuscript of her diary, “Set off from Mr Morphett’s Station at 10 o’clock, and landed on the banks of the Murray at 4 o’clock. Mr Inman gave us 4 wild duck eggs. Saw snakes swimming in the water as we came along, and a very large fish, besides Cormorants, Pelicans, Ducks and other birds. Very fine day and a fair wind.”

On the 10th December, the party arrived at the Great Bend at Morgan and set up camp at the entrance of Bryan (Burra) Creek.

On the 11th December while the main party remained at the Nor’ West Bend campsite, Gawler, Sturt, Inman, Craig and Bryan rode northwards to explore the country.

At 12 noon on a small hill to the north east of the campsite, Gawler saw a mountain in the distance and named it Mt Bryan after his young friend Henry Bryan.

As reported in Gawler’s account as stated in the Despatch from the Govenor Gawler to the Colonisation Commissioners for South Australia, January 4, 1840, “While contemplating the scene about us, smokes were observed to arise on Mount Bryan. Smokes indicate Natives, and Natives indicate the neighbourhood of water. Our casks had leaked, the bung had escaped from one of them, and the consequence was that our stock of water was just exhausted.

The horses had none on that day and were quite overdone. This chance of water on Mount Bryan induced me, after consultation with the gentleman of the party, to go there: it was 15 miles from us and placed us at a distance of 65 miles from our Camp. We arrived at its lower ridges long after dark. On the following morning, leaving Captain Sturt and Mr H Bryan in charge of our provisions and packhorses, I and Mr Inman set out in search of the Natives and water, but after toiling over the spurs and through the gullies during the morning of another hot day we could not find either. We found an extinguished Native fire and a ruined Native hut, but that was all, and we returned to the party to say that no Gawleralternative remained but to press through the night for our station on the Murray. I am persuaded that there were Natives and water in the mountain, and had I been alone, I should have risked all chances to discover them, but I did not feel it right to throw the lives of the party on such a probability.” 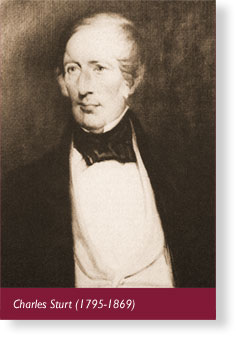 On Friday 13th December at the eastern base of Mt Bryan with all water gone and the temperatures rising, Sturt recommended that Gawler and Bryan set off on the strongest horses to seek help for the rest of the party. The party was approximately 65 miles (110 kms) from the camp so to help close the distance of rescue Sturt, Inman and Craig followed a short time later.

Gawler was reluctant to have Bryan accompany him due to his age and felt he should go alone however he states in his letter to his brother-in-law, Henry Cox, 20th December 1839, “The poor boy accompanied me most cheerfully, he had been resting all day and did not appear to suffer from the subsequent exertion. He brought me the pulpy but bitter fruit of the mesembryantheumum and the little berries of the exocarpi – and ate plenty of them himself – he made many observations about our course, appearing to recollect its striking features well, and calculated our distances with much precision.”

On the 14th December with the temperature well into the century, Gawler and his horse could not proceed, Gawler and Bryan swapped horses in order that Bryan could ride the Governor’s horse slowly for the 12 or so miles to camp and Gawler would ride ahead.

As mentioned in Governor Gawler’s letter to his brother-in-law Henry Cox dated 20 December 1839, Gawler states, “Bryan was active, cheerful and too intelligent for doubt to rest upon his ability to follow a compass track for 12 or 14 miles especially in a country with which he was generally acquainted and has traversed two days before – I therefore took his offer, gave him a compass, telling him that I considered the true course to be South East but that I recommended South South East as it was better to strike the river below the Bend than above it and after remaining with him a quarter of an hour to eat some berries of the exocarpi with some bread went on – I saw him follow me and thought he might keep my horse tracks which were very plain in the sand.”

An hour later, a hot wind in the Burra Creek floodplain whipped up a dust storm causing Gawler to collapse and take refuge at the foot of a tree and decided to reach camp at daylight the next morning as his horse was failing as well as himself however Gawler had lost sight of Bryan.

According to trackers, Bryan continued for about 6 miles where he removed the saddle from the horse he was leading. They found Bryan had taken a few steps towards the SSE and then all signs vanished with the exception of a note. (See note on front cover)

“On Monday Captn Sturt and Mr Inman with a very intelligent native went out and tracking back my tracks to the point at which we parted followed his to a place about 6 miles further on, at which he also appears to have lain down under the exhausting effects of the heat; and most unfortunately to have parted with his horse – His track after leaving me had been much to the southward of the extreme course that I gave him – His horse with the tether rope dragging after him, had here gone off directly westward, while a pencil note from him, left under his saddle, declared intention of going South South East and his footmarks were traced a few paces in that direction but then ceased to be visible. From Monday to Thursday the greatest exertions have been made to discover him – Captn Sturt Mr Inman and the [tracker] followed down his proposed course to the river which, notwithstanding his first deviation to the Southward, is struck about seven miles below the camp – boats went down the river and returned, for twenty miles – land parties crossed the bush in all directions – all of them lighting fires, firing shots, or placing notes of direction on trees in prominent places.

I never had so deep a regard for any young man that I had known for the same length of time, his character, looking at it with the severity of a Christian eye, was more faultless than that of any other individual of the same age…” said Governor Gawler in his letter to his brother-in-law, Henry Cox 20th December 1839.

Bryan’s horse eventually made its way back to Adelaide with its hoofs grown to enormous length.

Bryan was never seen again to this day and has not been declared missing, presumed dead or a death certificate issued.