“The magnificent Murray River weaves its way from the east across South Australia. It looks to be heading in one direction, until, just before Morgan, it makes a sharp bend as it heads south. It’s at this bend – The spectacular Nor’ West Bend – that you’ll find one of the most intriguing and magical properties in the state. Welcome to Nor’ West Bend Station”. Liz Walsh, SA Life 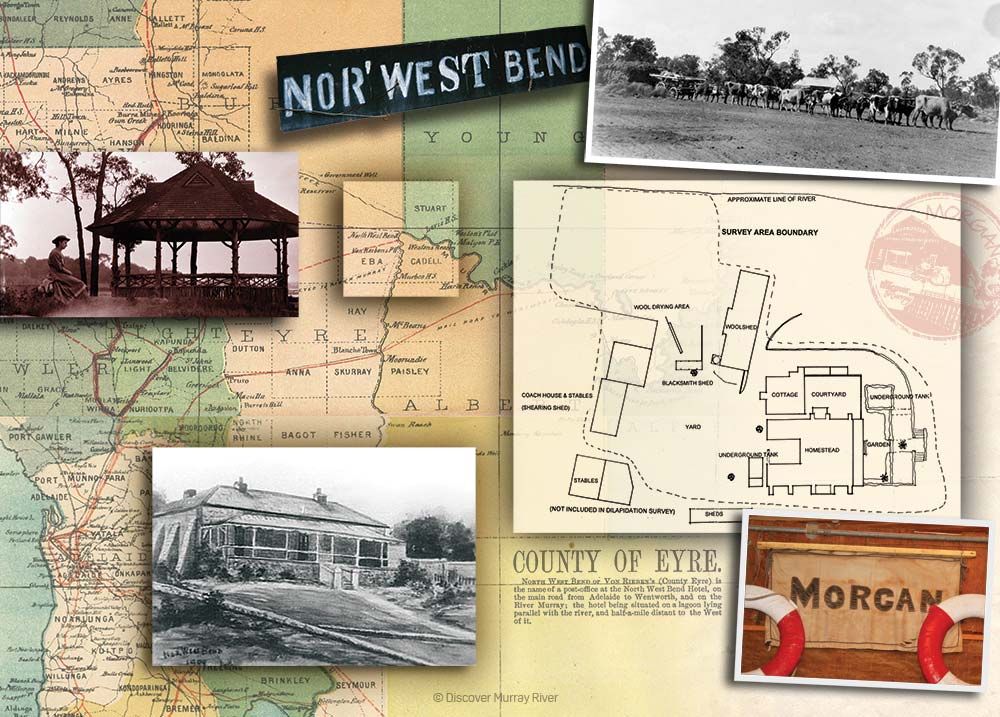 The Aboriginal name for the area was Tanami which means “never die”.

The booming river trade and the railway system completely transformed Nor’ West Bend into one of the busiest ports in South Australia, and by 1878 it was officially settled and renamed Morgan.

1850 – Edward Bate Scott took part in Governor Young’s expedition to investigate the navigability of the Murray River. Mr Scott’s first venture as a stock owner was the establishment of the North West Bend cattle station near what is now Morgan. Neither he nor subsequent owners did much good out of the enterprise. Sheep were largely substituted for cattle, and starvation and wild dogs accounted for a loss of 8,500 head in one year. Poisonous herbs extracted their toll, and nearly all the frontages to the river were sold or parcelled off for commonage, so that the watering of stock on the North West Bend run became a problem. The original lease consisted of 43 square miles, for which the rent was £21. Subsequently another 66 square miles was added by Mr Scott.

1851 – John Taylor took up the pastoral lease number 94, and secured 277 square km to the north and south of the bend.

1853 – Phillip Levi, an Adelaide merchant and one of South Australia’s largest land holders, purchased Nor’ West Bend station, and Edward Bate Scott continued on as manager until September 1854, when Stephen Jarvis took over.

1856 – Levi’s sister Martha and her husband Charles Campbell, who was appointed station manager for Levi, arrived, along with the magnificent furniture they brought out from England. Gardens and orchard were laid out, the flower beds terraced almost to the river’s edge. It was indeed a gracious home, of which Martha became the mistress.

The Campbells had four boys growing up on the river station which then covered an area of 935 square km; life would have been most exciting. Martha was a great horse-woman, who enjoyed the country life. However, it did not last, as Charles cut his hand on a glass bottle and died of tetanus on the 5th of March 1859. He was buried in the sunny orchard close to the house. The body was later interred in the West Terrace Cemetery.

1862 – Charles Armitage purchased the property for £30,000. He added another 1754 square km to the property. Donald McLean was his very competent overseer from 1864. He initiated many improvements to the station, including the introduction of wire fencing to this State and irrigation. The station was noted to have 137 miles of wire fencing forming sheep paddocks, which eliminated the need for shepherds, and several wells, some of which were up to 300 feet in depth. He was instrumental in raising water with steam engines, with storage tanks supplying self-filling troughs, which was also copied throughout the colony. These helped the station survive the drought.

1876 – Alexander Hay purchased the Station for £86,000. He coincidentally married the daughter of Dr Gosse, who had attended Campbell at Nor’ West Bend during his fatal illness.

Hay’s success from one year’s wool clip built the Victor Harbor mansion of 22 rooms called Mt Breckan. The leases on this huge run expired in 1889. When Hay sold his interest in Nor’ West Bend in 1890 it measured 5200 square km, (2000 square miles). The property was auctioned by Elder Smith and Co, and surveyed into 1000 acre lots or less, and purchased from the crown.

1911 – William and Leslie Dean. The Deans took up residence and were known to employ at least 2 maids. The dining room was added to the courtyard to cater for more entertaining.

1922 – The Minister of Repatriation. Houses were built for ex WW1 veterans on the river flat but were flooded in 1932 and the 1956 flood destroyed them completely. There are foundation remnants still to this day.

1936 – Albert Brockmeyer Albert was a young man of 31 years when he arrived at Nor’ West Bend, and was the longest serving owner-manager to date. He never married, and although he lived alone all his life he loved to entertain his family and friends. The tennis court was maintained and a badminton court was marked out in the wool store. He made the mallee stick furniture dotted around the yard today. He also turned the school room in the homestead (which 16 students once attended) into a general store, and collected extensive historic memorabilia. Albert died in 1999 at the age of 94 and was playing cards and snooker at Nor’ West Bend up to the weekend before he died.

1999 – Heather and Michael Pitman Niece and great-nephew of Albert Brockmeyer. Michael was station apprentice and then station manager until they subdivided the 2000 acres remaining into smaller lots and started selling in 2001.;

2002 – Kevin and Sue Pedder Current owners of the Nor’ West Bend complex and the remaining 260 acres. We have chosen to not restock the land; rather, to allow natural regeneration of the mallee trees and scrub. The first 8 years have been in drought. We have seen annual rainfalls from 2 to 8 inches/annum. The gardens had completely died, so we have chosen to irrigate through sub-surface drippers, eliminating all overhead watering. We do still use Donald McLean’s irrigation pipes and stone tanks. We are using historic and water-wise plants and restoring the Victorian terrace gardens and reinstating a five acre parterre orchard and flower-picking garden.

The veggie patch now has a large selection of permanent plants along with the seasonal annuals.

Their aim for the building restorations was to recycle as much of the original fabric of the property as possible, rather than introduce too many reproduced items. The homestead had deteriorated so much: part of the roof was missing along with some ceilings, electricity and plumbing. They are continuing to build on the Brockmeyer collection by adding to the general store, blacksmith’s shop, and in the maintenance of the farm and horse-drawn vehicles. The waterfront has been an important restoration project. There is now a large wharf where paddle boats would have loaded wool. A smaller produce wharf, which would have been easier to reach with a horse and cart to, and a Victorian rotunda made of local mallee finish the frontage.

The Station complex is situated fifty meters from the river, and comprises seven major buildings. They are shown on the site plan. The complex is well above the river flood levels. The buildings are of limestone which was quarried from a hill in the immediate vicinity of the complex. The builders are said to have been three Irish brothers and two Indians.

This building was originally of seven rooms, which have been built in a U-shape about a central courtyard. It is orientated in a north-south direction with two wings extending to the north. A prominent feature of the building is the number of stone buttresses which have been constructed on each side of the house. A second feature of the homestead is the fact that the roof is covered by sheet iron roof tiles with rolled joints to each side; trademarks still visible to this day indicate that they were imported from Morewood and Rodgers and manufactured in England. These tiles predate corrugated iron.

The exterior walls have all been whitewashed in white with lime mixture. There is a cellar under the central front room of the homestead. Entry to this cellar was made originally by means of steps from the central courtyard, but latter additions resulted in this now in the dining room. After these additions a second entrance was constructed from the front verandah on the south side of the house.

There is a large, deep, covered well at the north western corner of the homestead, which collects rainwater from the roof of the homestead. The interior of the homestead has now been renovated back to as close to original as possible, with paint scrapings and wallpaper remnants collected, so finishes could be reinstated. An interesting feature is that the three southern most rooms possess French doors which open out onto the verandah. 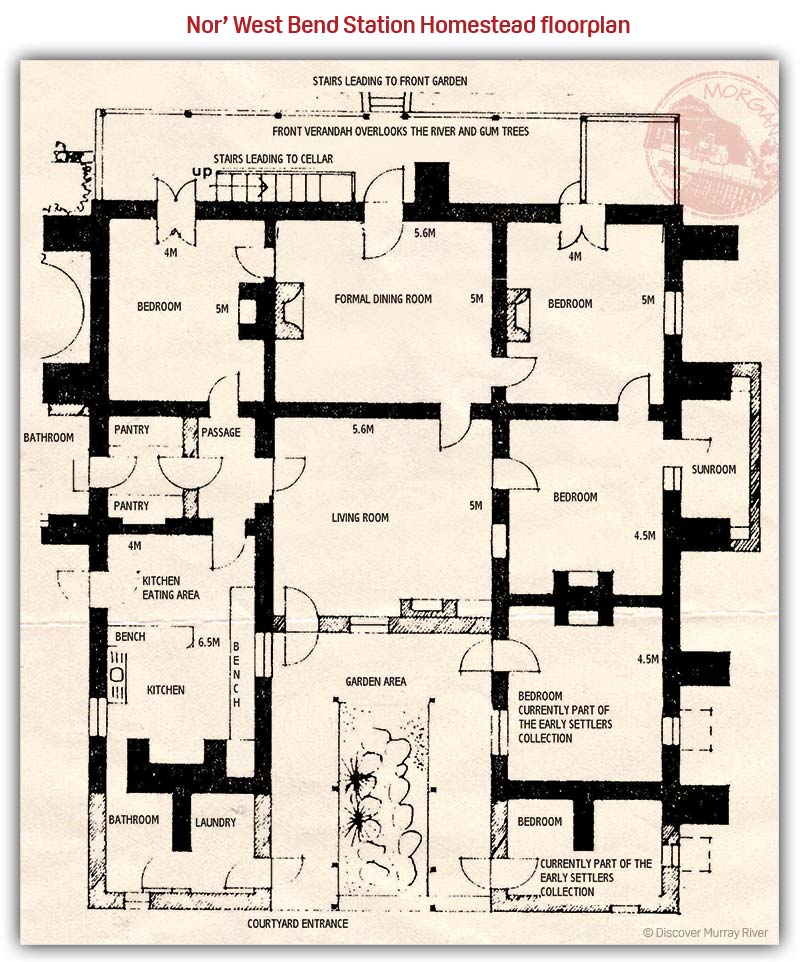 Immediately to the east of the homestead there is a small five-roomed cottage. This is also of limestone and is reputed to be older than the main house. The fact that there are fewer buttresses on the eastern side of the main house than the western side, suggests that the larger house was of later construction. This cottage now has an iron roof, though the original roof was probably wooden shingles. The cottage has been rendered and lime whitewashed on the outside. The interior was renovated prior to commencement of the homestead renovation, so that the current owners had somewhere to live.

To the south of the residential complex is a large terraced garden, which, when current owners acquired the property was bare, but the stone terracing was still evident. There is a small courtyard immediately south of the cottage. This is formed by the two residential buildings and the construction of the eastern wall of the cottage. There is a privy set in this wall that was supposedly the original gaol/lockup for the station. The open area of the courtyard within the wings of the main homestead is tiny because of the verandahs which surrounded it on three sides.

The largest building in the complex, also made of local limestone and with a galvanised iron roof, was once used to store up to 17,000 bales of wool. This building is 23 meters long and seven meters wide, though not perfectly rectangular. It is constructed on a steep slope so that, while its western end is single storied, the eastern two-thirds of the building was of two storeys. The top level was used to class and bale the wool after it had been scoured and dried on the adjacent limed hill. Storage was in the bottom storey, and the bales were then rolled out and down to the wharf for loading. The upper floor of the eastern end has been removed and laid on the original earth floor many years ago to provide an indoor badminton court. The western single storey end has been recently restored and is currently being used as a billiard room.

The northern side of the complex yard is the coach house. This building is also of local limestone and has an iron roof. Originally it was of two storeys, with the upper story being used as a hay loft. The upper floor has been removed. This building has gable ends with a door set high in the western end. It is currently used for car storage.

It was of two storeys, with the upper storey being used as a hay loft. The upper floor has been removed. This building has gable ends with doors set high in the eastern and western ends. The roof was originally made from wooden shingles, which still remain under the now corrugated iron roof. This building is the last in the complex to be restored and we are researching the lean-to shapes which need to be replaced. The construction is limestone, iron and timber.

With limestone walls and timber lining, this building houses a large collection of old harness and some tools.

A thatched roof and mainly timber structure which contains a bellows and forge along with anvils and handmade tools.

Around 1870 Charles Armitage, one of the first owners, started by taking the wool down to river in wire baskets, washing the wool in the river and laying it out to dry on the hill sealed from burnt lime from the property. The hill is still in perfect condition today and is situated adjacent to the woolshed, where the fleeces were then baled and awaited transport by riverboat. Freight to England by ship was charged by weight, so by removing the heavy Nor’ West Bend dirt, the cost savings were significant. 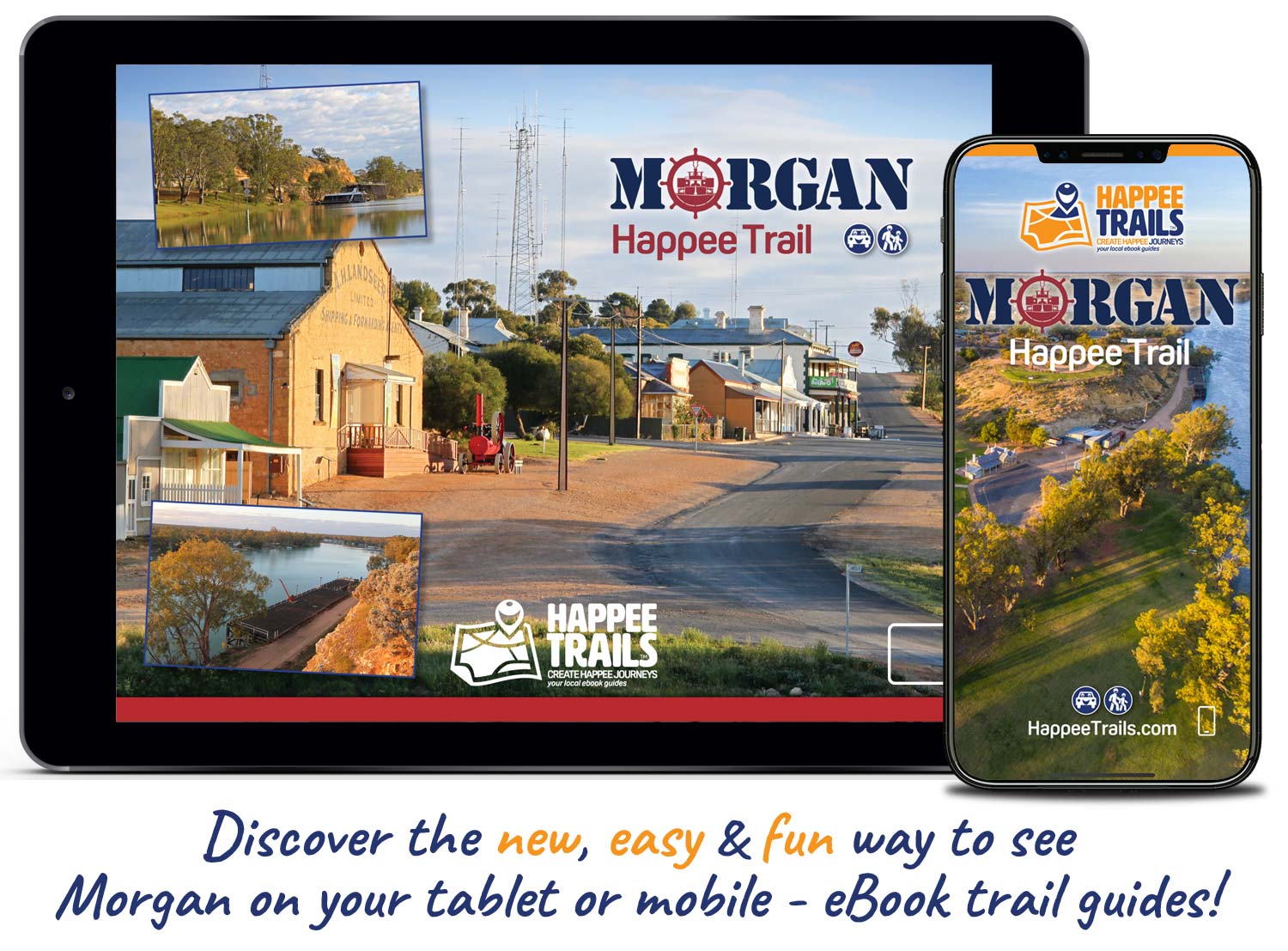